I have Jacqueline T. Lynch, the author of Cadmium Yellow, Blood Red, first in the Double V Mystery Series here today. Let’s start with a couple of questions about your writing process.

You have so many projects; books, plays, movie blog, theater blog, travel blog… do you have a routine you follow daily to juggle it all?

I enjoy working on a variety of genres and types of writing.  It keeps things fresh and interesting, and stretches your writing “muscles.”  My routine can vary as well.  I will take some time in the day to do a little research, tend to the blogs, but most of the writing work that day will usually be on the project that is the most pressing.  That can really mean juggling.  For instance, my pressing project right now is to finish book three of the “Double V Mystery Series” which is to be called Dismount and Murder (takes place at a horse show).  I had to put that on hold for several days to prepare for a speech and PowerPoint presentation I made recently to an historical society on my book States of Mind: New England, which is nonfiction.  I have my “on deck” projects and my “center stage” projects.

Do you outline or do you write “by the seat of your pants”?

That depends on what I’m writing.  Non-fiction and plays require very precise outlining and sticking to a logical progression of facts, issues and plot.  Some novels, for me, don’t require as much outlining.  For the mystery series, which leans quite heavily on the history of the period—which is the late 1940s and early 1950s—I like to work around real life events and social changes as a background to the story.  Once I know the particular points I want to hit, then I fill in with a lot of “seat of my pants” type of writing.

Part of this “seat of the pants” writing has to do with how I’m getting the story down.  I’ve experimented in the past with talk-to-type software, just because I was curious to see how well it would work for me.  Anyone who has used it knows it’s a lot of fun, but it’s not perfect.  I’ve put a new spin on that recently.  I’m talking most of the book into my hand-held recorder and later I transcribe it.  I like to pace around the house, talking my story, and as I’m typing it later on, I have the opportunity to edit it even before it gets on the page.

But, it’s a little embarrassing shouting, “You never loved me!” to the mailman as he comes up the back steps to drop the mail in the box, a bewildered expression on his face through the screen door.

I think this old battle is purely a matter of taste.  Some readers are more interested in solving the puzzle.  When I read a mystery, I find I’m more interested in engaging characters.  There aren’t too many plots to work from in a mystery.  How many new ways can you find to kill a character?  Especially in a cozy, where none of that is graphic.  I think this is what drew me more to cozies, because character tends to be emphasized more than plot.  The developing relationship between the two main characters in my series, Juliet and Elmer, is a running subplot just as important to the series as any mysteries they solve together.  Their relationship is like a secondary mystery. 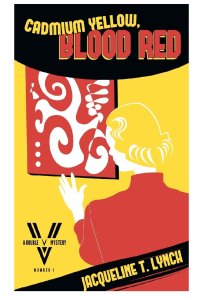 Why did you choose to set the series in the 1940s?

The post-War period interests me.  As a classic film fan, this is also the period of the moody Film Noir movies.  My novels have a New England setting, primarily in Connecticut at first and later books will be set in other locations.  Here in New England, the population was shifting; wartime industry lured thousands to our 19th century industrial centers, who then left the cities for the suburbia being carved out of our farmland. In the 1950s, a good deal of that industry began to head south. New interstate highways seemed to aid the exodus, skirting cities, or else piercing through the heart of them. The 1950s saw the heyday of the great department stores: G. Fox, Sage-Allen, etc.  The heyday of summer theatre in country towns. But even these delightful diversions were in a state of flux. Times were changing, and though we reached for the promise of a great future to wipe away the memory of war and Depression, we were also afraid of letting go of the past.  Elmer’s personal history as an ex-convict embarking on a new life after prison also reflects this.  He’s a stranger in a strange new world, and Juliet guides him, and us, through it.  He’s amazed at his first trip to a supermarket.

I also like the cars.  I mention frequently that Juliet drives a Lincoln Cosmopolitan.

Who or what inspired you to start writing, when did you start and did you read mysteries as a child?

I think I was about fourteen when I decided I wanted to become a writer, but on reflection, I had been making up stories and writing for my own amusement since I was a small child, I just didn’t realize I was being a writer.  I’m a little slow on the uptake sometimes.

I think reading mysteries was what spurred me to become a writer, especially a collection of Agatha Christie and Ellery Queen in my local library that I enjoyed as a teenager.  I used to read the children’s chapter books in earlier years, books like “Nancy Drew” and I liked them, but it wasn’t until high school and Agatha and Ellery that I thought I’d like to try writing a story like that.  I did, and as I recall, it was awful.  But the challenge thrilled me and I never looked back and never stopped trying to get better.

When you aren’t writing, what do you like to read?

A lot of nonfiction, primarily history, economics, classic literature, mysteries—of course, and sometimes I’ll just grab something off the “new books” library shelf without knowing anything about it, just for fun.  These can be westerns or crime, or literary fiction.

What do you like to do to balance the demands writing places on you?

Balancing is not easy and I always struggle.  House chores, family, and just earning a living takes up most of our time.  I love to travel, and would do more if I could.  I also love to attend plays and symphonies, and going to museums.

Tell us three things about yourself that aren’t generally known – besides the fact you are a twin.

Yes, I do have a twin brother, John, who has joined with me in producing a children’s picture book.  He did the illustrations.

I don’t know if there are three things about me that are not generally known that are particularly interesting.  I once rode on a camel in the Australian outback.  I used to belong to a community theater group where I worked backstage, directed and produced plays.  I’m a sucker for reruns of “Murder She Wrote”.

Is there anything else you’d like the reader to know about you?

Cozy mysteries offer such a wide variety of stories and characters, where readers can match their own personal interests and hobbies to the kind of series they follow.  I’m delighted to be part of the cozy mystery family.

Thank you so much for your time, Jacqueline, I wish you great success with your series. Readers can find Jacqueline T. Lynch at the links below and the second book in the series, Speak Out Before You Die,  is also available.

A “cozy” post-World War II mystery about a museum heist, a missing child, a murder, and the partnership of a recent ex-con and an even more recent widow. In Hartford, Connecticut it is 1949, and Juliet Van Allen, a museum administrator, discovers that her artist husband is having an affair with another woman. Elmer Vartanian, recently released from prison for a museum robbery, is coerced into helping scout the museum for a heist by a gang that has kidnapped his daughter. Juliet’s husband is found murdered. Elmer signs on as her alibi in exchange for something he wants. Together, dogged by the scandal-monger newsman, the shrewd police detective, and scrutinized by the even more judgmental eye of Hartford’s elite, the rich widow and the ex-con try to outrun them all in a 1948 Lincoln Cosmopolitan, in a world where Modern Art meets old-fashioned murder.

All my books on Nook here: http://www.barnesandnoble.com/c/jacqueline-t.-lynch

All my books on Smashwords here: https://www.smashwords.com/profile/view/JTLynch

Specifically for the Double V Mysteries – here you can see images and locations that are mentioned in my mystery novels (including what a Lincoln Cosmopolitan looks like) – http://pinterest.com/jacqtlynch/double-v-mysteries/