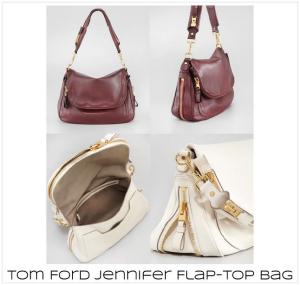 How must it be to be the person who told Oprah she couldn’t afford something? One of the wealthiest and most recognizable women in the world. I bet more people recognize Oprah than the Queen of England. The store owner said it was a misunderstanding – a language problem because the clerk is Italian. What she was actually saying is we Swiss aren’t racist but those Italians…

I was a little shocked Oprah, who does good things with her money, was considering a $38,000 handbag – not that she doesn’t deserve the odd splurge. My husband, who is no Oprah fan, defended her saying she only wanted to look at it and probably was as curious as the rest of us as to what made a bag worth $38,000.

As a handbag freak (it used to be shoes until my knees gave out) I decided to investigate. Until downsizing to the condo, I had a closet full of handbags. When we moved, my husband said I could keep three. THREE?!?!?!!! Why not just cut off my arms? The point is, I am something of a handbag expert. When I was sixteen, I worked in the handbag department of The Outlet. I know a good handbag. So why is the name Tom Ford not making me salivate? Because they are UGLY. Would you consider carrying this mink bracelet bag? The Jennifer, in

its various versions (shoulder bag and tote) is one of the only bags he makes that I would even consider. He has a couple of nice totes but I am a shoulder bag kind of person. Although I have discovered I have a knock off of his ‘Jennifer Trap

Calfskin Tote Bag, Red’, my one and only tote. I like it because it is red and I can slip my laptop into it. And it is funny how and where I got it. I was at Big Lots of all the improbable places. Certainly not there looking for a bag. Suddenly I heard this handbag calling to me. They do that. It is an actual phenomenon. Just ask my husband. We were in a massive department store once when I announced to him a bag was calling me. I led him through three floors then past hundreds of bags without even glancing at them, straight to the bag that became my constant companion for several years. Anyway, the same thing happened with the red tote. I got the call. I guess it is my superpower. But in Big Lots? Something must be off. I followed and there it was. Not with the rest of their cheap bags, just hanging on an end cap. No tag. I searched through all their bags. Not another one. And certainly nothing of this quality. I brought it to the register. After much consultation, they charged me $20!!!! Seriously, it’s a thousand dollar bag. At least. My handbag miracle.

Believe it or not, my second such miracle. The first one happened in a little leather shop in Sligo. It was pouring rain and I was walking back to the carpark dragging two kids and all my shopping when I got the call. I followed as I must. It was right in the window. I knew I could not afford it but I went in. No price tag. And I knew I could never afford it anyway. But it was so beautiful. A deep green hobo bag made from buttery soft leather. I just had to ask. Even if I knew I couldn’t afford it. The shop owner was gone to lunch leaving behind a bored teenager. “I dunno, would ye give me twenty-five quid for it?” Well I was at a period in my life where I didn’t have even £25 to throw around but I’m not stupid. I slapped down the money and ran for it. I had that bag for years until it somehow was lost in a move from Florida to Rhode Island. 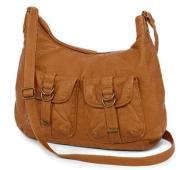 My last constant companion bag was a Liz Claiborne that I bought on June 26, 2007. The day Liz Claiborne died. Which was my excuse to my husband for buying it. It was in tribute. At that point my handbag closet was already overflowing and my husband had said there were to be no more handbag purchases. But how could anyone begrudge me a memorial handbag? If I am honest, I had bought the bag and only heard Liz Claiborne had died while I was listening to the radio on the drive home. Besides, it was a cheap bag. About $40. Why should he object? Of course it was synthetic and not leather so it wore out fairly quickly. But a

nice bag while it lasted, although I would never buy synthetic again. Well that’s not true. My current daily, constant companion bag is a lovely distressed brown  faux leather bag from Sparrow True. But that is just because I am waiting for a call from my next handbag and I gotta carry all my junk somewhere.

But to get back to Oprah. Turns out she wouldn’t have bought that bag. Glad to hear it. 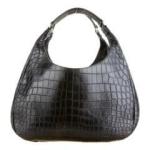 But I’m still not sure which Jennifer bag it is. They are all under $3000 so obviously it was made in different material than you can buy elsewhere. But if @OprahsPriceyBag has it right this is the one. I’m not overly impressed. At any price.

And just in case you didn’t hear the original interview that started all this: