Spinetingler Magazine, one of the internet’s oldest websites for noir, crime, and horror short stories. Through the Los Angeles Times/Washington Post News Syndicate, his news and feature stories were published in over five-hundred newspapers and periodicals worldwide. His two screwball mysteries, BIG NUMBERS and BIG MONEY, are being reissued by DOWN & OUT BOOKS, with the new BIG MOJO to follow. His short stories have appeared in A Twist of Noir and Beat to a Pulp. Getze is an Active Member of Mystery Writers of America’s New York Chapter. He would also like you to think he is the guy on the left but that is really him on the right. Whoever he is, he’s on tour with Great Escapes Virtual Book Tours and is doing a guest blog post today and I’ll be reviewing his book below. Be sure to leave a comment below (with your email) for a chance to win an e-book copy of BIG NUMBERS- Jack is giving away TWO here on this blog. For more chances to win click HERE. Be sure to visit the other tour stops (listed below) for more chances to win. Welcome Jack. Hey! Wait a minute, you’re not Jack!

Jack Getze couldn’t make it today. He’s at the Youth Springs Eternal Beauty Spa & Salon in Bermuda, recuperating from Bouchercon and a family vacation. I’m his series protagonist, Austin Carr, and believe me, I’m the first string when it comes to guest blogging anyway. To prove it, you are right now viewing this exclusive-to-Kate’s-readers photo of The Famous Author* at Deadly Ink, New Jersey’s own mystery conference.

Do you think HE wanted you to see that white hair – the lack of hair — that shirt?

He’s so easy to fool. All I had to do was tell him I’d write about the same subject as Kate, whatever that would be. I didn’t mention I already knew the topic – TFA’s gray hair and his old author photo, probably taken during the first Roosevelt administration. Ha. I can’t wait until he opens his emails tonight.

*His family and I call him The Famous Author, TFA for short, because he is so NOT famous. His granddaughter’s self-published coloring book has more online reviews. We give him hats, clocks, and T-shirts with TFA printed or engraved on each article. He wears the stuff, particularly the hats, so he’s pretty good natured about our teasing, I suppose, although he definitely doesn’t like it when I talk about his missing hair.

So I won’t. Talk about his missing hair.

Actually, I’d better talk about the book – BIG NUMBERS – and personally, as a quick description, I like the one-liner TFA’s marketing people came up with, which I’m guessing Kate will mention. Something about Bugs Bunny.

What I know is that the novel starts off with me, Austin Carr, about to be murdered by an undisclosed killer – I’m being yanked off a boat, tied to a live, six-hundred-pound giant bluefin tuna. The first-person story then flashes back three weeks, shows you all the suspects and why Austin has ticked off each one. There’s a steroid-crazed pro wrestler livid over Austin’s investment advice, a jealous sales manager — the target of Austin’s pranks — and a scheming widow with red hair, sexy curves, and nasty secrets. 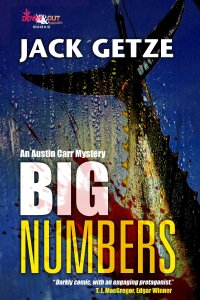 Root for divorced dad Austin Carr, a funny, oversexed scamp who’ll use anything and everything to get his kids back. Think Bugs Bunny with guns and a penis. (Austin obviously didn’t think I would leave it in, that’s why he brought it up. Ha! Doesn’t know me very well!)

Divorced father Austin Carr wakes up every day in a beat-up camper, parked on someone else’s private property. Why? Because his alimony and child support payments were established by New Jersey’s family court system when his income was double, and for the last two years he has failed to earn the legally mandated monthly nut. He’s had his savings drained, his Maxima repossessed, his salary attached, and his visiting rights suspended. He bought the twelve-year-old Chevy pick-up with the rusty camper for $800 last month because another landlord tossed his butt in the street. Will stretching the rules, his own morals, and the boundaries of common sense raise the cash needed to get his kids back? Or will his big mouth and bad behavior set him up for a nasty double-cross? Find out if Austin can redeem himself and win back his children.

This book is so f*&%*&g funny, I read it right through in one sitting. Insane. It is like Carl Hiaasen and Dave Barry left Florida for the Jersey

shore, bringing Charlie Sheen with them. Austin Carr is a homeless stockbroker. Sort of. He’s a salesman. Living on 100% commission during a recession and with child support payments can lead to getting kicked out of your apartment, having your car repossessed and living in a camper. Not even a real camper. A beat up old pickup with one of those camper toppers on it. Which he parks in the lot at Luis’s Mexican Restaurant where he also takes advantage of the shower in the employee dressing room. Austin gets mixed up with a redhead which leads to illegal bond and money transfers and in the course of less than two weeks is run down by a car, beat up, his manager tries to shoot him, is buried in sand at the water’s edge with the tide coming in, then he’s kidnapped and finally becomes the victim of attempted murder by Bluefin (yes, the fish). And when he sneaks in to watch his daughter’s swim meets, Austin wears nothing but a speedo. Now anyone who has known me for any length of time has heard me say, “When I take over the world, I’m going to _____________. Right after I outlaw speedos.”  But Austin has the best explanation for wearing a speedo that I have ever heard. He says that no one ever notices you in a speedo because everyone is afraid to pay attention to a guy in a speedo. I highly recommend this book. Just don’t read it on the bus or train into work. Insane laughter makes the other passengers uncomfortable. ♥♥♥♥♥

My name’s Austin Carr. I’m a stockbroker. The slick expensive business cards in my wallet say I’m a Senior Financial Consultant for Shore Securities, Inc., Members of the American Association of Securities Dealers, but I’m really just a salesman and I work for myself. Straight commission. If I don’t sell, I don’t eat.

A lot of people in my line of work call themselves investment counselors. They wear two-thousand-dollar Italian suits, carry alligator attaché cases, think and talk about themselves as professionals like doctors and lawyers. In truth, we’re closer kin to used car dealers, only more dangerous because losing your life savings is a tad worse than getting stuck with a leaky transmission.

It’s hard to sport illusions about yourself when you live in a camper. And I’ve always treated my clients with honesty, to the point of aggravating every sales manager I’ve ever had. Even so, keeping my self respect, I have not been thinking about this job in a favorable light. In fact, in the years since the market crashed, ruining my sales numbers, my finances, and more recently, any chance of being with my two children, Ryan and Beth, I’ve been wracking my brain, trying desperately to figure another way to earn a living.

Although no solution to my dilemma has yet presented itself, I’ve discovered it helps to ruminate in a positive setting: Luis’s Mexican Grill on Broad Street in Branchtown. The decor reminds me of home, Los Angeles, and Luis has an authentico Mexican chef, Cruz. Best of all, Luis works the bar himself every day.

“You are not going to work today?” Luis says.

“Careful, Luis. Your query borders on insult. In fact, I have already called work, only to discover that my monster client delayed our scheduled discourse until this afternoon. I stayed here this morning to spend some quality time with you and Cruz.”

“I recommend this be your final cocktail,” Luis says.

Dealing with numbers all the time is an ache in the ass, definitely, but my biggest problem with being a stockbroker is having to spend all day on the money machine, dialing for dollars, calling busy people at the wrong time, apologizing because the back office screwed up a check, downplaying the risks of an investment to exaggerate the benefits, dancing investors from one asset to another so I can take part of their principal as commission. To be a successful stockbroker, you have to be slightly larcenous.

I lick the wet salt from the rim of my still empty margarita glass. Of course I never worried about little things like morality while I was netting five- to ten-thousand dollars a month. It’s only been since my income dropped by more than half, and mainly since I lost physical contact with my children that I search for the social significance of securities sales.

12 thoughts on “BIG NUMBERS, big laughs and a giveaway”