Barbara Jean Coast is the pen name of authors Andrea Taylor and Heather Shkuratoff, both of whom reside in Kelowna, BC, Canada.  Barbara Jean, however, is a resident of Santa Lucia, California (eerily similar to Santa Barbara), where she enjoys long lunches, cocktail parties, fancy dinner dates with attractive and attentive gentlemen.  Her interests include Alfred Hitchcock movies, reading Carolyn Keene, music by popular musicians, such as Frank Sinatra and Tony Bennett, shopping for new dresses, attending society events and always looking fabulous in kitten heels.  STRANGLED BY SILK is her first novel in the Poppy Cove Mystery Series.  Ever since they were here on the blog back in May, I have wanted to read STRANGLED BY SILK. I have finally gotten to it on my large TBR pile (my review is below) and Andrea and Heather are here today as well to talk about their (Barbara Jean’s) cozy set in the fifties. Welcome ladies.

Years ago when we first started conceiving the idea of the Poppy Cove Mystery Series, we shared in the love of a good cozy where characters drove the story, the settings were bucolic and idyllic, filled with people and places a reader would love to visit or stay.  Then something goes terribly, terribly wrong – murder and murkiness rocks the quirky little world and then things are never the same again.

Together we thought about our people, places and occupations to base the series of stories and the muses spoke loud and clear.  The inspiration of the California coast, Santa Barbara (which is where our fictional Santa Lucia is based upon), the beautiful designs of the time period we chose (late 50’s/early 60’s) and the carefree lifestyle, which at that point the society was starting to gain a conscience as the years progressed, were all elements that were ripe for an evolving storyline.

The research has been a joy.  Fortunately there are so many people – family, friends and new acquaintances who have been sharing their memories, stories and photos of the time to help us tell the tales from the perspective of the era, bringing us closer to them personally.  Media, in the form of ads, television, movies, music – is all at our fingertips through the internet as well, expressing an aesthetic that we both share a great passion for.  The Santa Barbara Historical Society has been very helpful in answering out questions to assist us in imagining our beloved Santa Lucia from that time.

The biggest thing that makes devising STRANGLED BY SILK, the rest of the Poppy Cove Mysteries and Miss Barbara Jean herself?  Creative license.  Given that, basing our world as a piece of fiction allows us to take what we know of now and then, in the way that people change and yet still stay the same, rounds out the desire to tell the best story we know how to do and have the pleasure to share it with you.

Thank you so much, Kate Eileen.  It’s been a great opportunity to connect with you and be featured on your blog.

Thank you for being here.

Andrea always imagined herself being a supersleuth girl detective and writing adventurous stories, full of mystery and intrigue since she was old enough to hold a pencil.  She resides in Kelowna, BC, Canada, where she writes under the pen name of Barbara Jean Coast with her co-author friend, Heather Shkuratoff, and travels often to California to further develop the stories and escapades of the Poppy Cove Mystery Series.  STRANGLED BY SILK is their first novel.  Andrea has also published freelance articles about fashion, current events, and childcare, and is currently blogging on WordPress about creativity and poetry, as well as researching for her own literary novels.

As an avid mystery reader, Heather joined lifelong friend Andrea Taylor to create STRANGLED BY SILK, the first novel in the Poppy Cove Mystery Series, written under the pen name of Barbara Jean Coast.  Growing up in a family of talented crafters and sewers, Heather developed her own skills to become a dressmaker and designer, which helps to give rich detail and character to their stories.  She lives in Kelowna, BC, Canada, but spends much time in California, researching for the novels and doing her best to live like Barbara Jean. 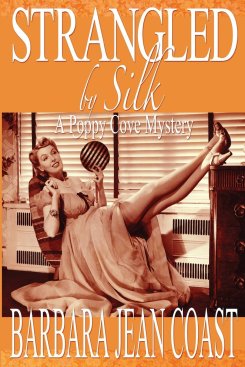 Darlings!   Here’s the scoop on my latest mystery STRANGLED BY SILK.  It’s all about Daphne and Margot––two independent young California women in 1957––own their own dress shop called Poppy Cove.

When one of their top clients––Constance Stearns-Montgomery––is strangled to death with her own silk scarf at the opening ceremonies for her new girls’ academy, Daphne and Margot are shocked.  They can’t believe that such a horrid crime could take place in their sleepy little oceanside village of Santa Lucia.  Worse, they’ve lost one of their best clients.  The two women quickly become embroiled in solving the crime.  After all, if anyone can track down the killer, it should be them.  Margot’s long-time beau is the town’s top cop, and Daphne is a master at using her flirtatious wiles to extract information from unsuspecting men.

Of course, neither girl will let their snooping get in the way of more urgent tasks such as choosing new textiles and accessories for Poppy Cove or planning their fall fashion show or––most important––selecting the appropriate ensemble to wear for each and every occasion.  But these two fashion detectives are on the case, and the murderer––and the poorly attired––had better watch out!

I knew I wanted to read it. Sometimes I felt as though I had because I have heard so much about it. But I finally got around to reading STRANGLED BY SILK. The only good thing about waiting so long is now I won’t have quite so long to wait until the second book comes out. I absolutely LOVED the clothes. The descriptions are so good you can see them. And I have a thing about 50s. My mother was a real clothes horse in the 50s and 60s and in my teens I wore vintage – worsted silk suits, sundresses to die for, crocodile heels and bags… So the book brought that back. It was also interesting to read to see how different the country and the economy were then. Two girls opened a shop and they were able to actually hire people – sales clerks, seamstresses, try pulling that off now. The characters are interesting and well

drawn. There was just enough of a touch of romance and the  mystery itself was well written and will have you back and forth right until the end. I was left with only one question at the end. How did Daphne and Margot get together in the first place, become BFFs and and come to go into business together? But the authors probably have a series arc and their past may be relevant in a future book and bring mystery and danger. I for one can’t wait to find out. ♥♥♥♥½

3 thoughts on “Travel with me to Poppy Cove”