I WILL BE INTERVIEWING CHRISTOPHER MEEKS HERE ON THE BLOG TOMORROW SO BE SURE AND STOP BY. AND ENTER THE GIVEAWAY AT THE BOTTOM OF THE PAGE.

Christopher Meeks was born in Minnesota, earned degrees from the University of Denver and USC, and has lived in Los Angeles since 1977. He’s taught English at Santa Monica College, and creative writing at CalArts, UCLA Extension, Art Center College of Design, and USC. His fiction has appeared often in Rosebud magazine as well as other literary journals, and his books have won several awards. His short works have been collected into two volumes, “The Middle-Aged Man and the Sea” and “Months and Seasons,” the latter which appeared on the long list for the Frank O’Connor International Short Story Award. He’s had three plays produced, and “Who Lives?: A Drama” is published. His focus is now on longer fiction. His first novel is “The Brightest Moon of the Century,” and his second, “Love At Absolute Zero.” 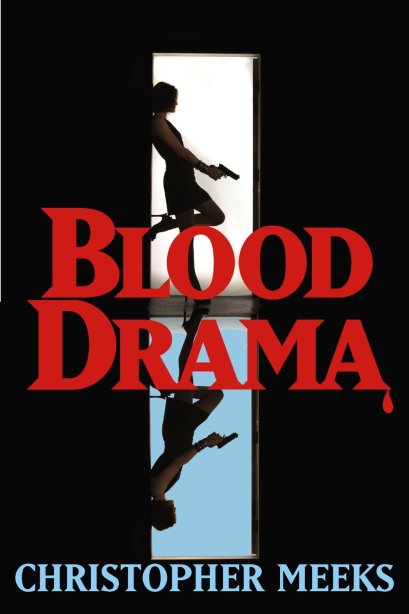 Everyone has a bad day. In the crossover thriller BLOOD DRAMA, graduate student Ian Nash, after losing his girlfriend, gets dropped from a Ph.D. program in theatre. When he stops at a local coffee shop in the lobby of a bank to apply for a job, the proverbial organic matter hits the fan. A gang of four robs the bank, and things get bloody. Ian is taken hostage by the robbers when the police show up. Now he has to save his life.

FBI Special Agent Aleece Medina’s analysis of the bloody bank heist drives her into the pursuit of a robbery gang headed by two women. She doesn’t anticipate how this robbery will pit her against both the bandits and the male higher-ups in the FBI while the media heats up during a giant manhunt.

The robbers are about to kill Ian, and all he has at hand is his knowledge of the stage.

I thoroughly enjoyed this book. It was not what I expected. I had come across BLOOD DRAMA before I signed on for this tour and saw suspense/thriller and got it for my husband’s Kindle. Then I signed on for the tour and read it and discovered it is not your average suspense thriller. Much more like Hart to Hart or McMillan & Wife or to be more currant, Castle. You have male and female protagonists who are very well developed and likeable and four bank robbers, two of whom you would like to see get away with it. And that is what makes this book a bit different. The antagonist(s) in a thriller is not usually so well developed. That usually falls into cozy territory where the antagonist is a fellow resident of the town. You have two female bank robbers who have good solid reasons, if there can be such a thing, for robbing banks. It is only when one of the male accomplices gets trigger happy that things go wrong. We have Ian who is the kind of guy you expect things to go wrong for. Kinda handsome and smart but still kind of a loser. In a bank full of people, you just know he is the guy who would of course be taken hostage. He had just been dropped from his doctorate program and is applying for a job in a coffee shop that happens to be in a bank lobby. To get a picture of Ian, all you need to do is read what he writes on a job application:

I am not a particularly avid coffee drinker, but your location three miles north of here, with its interior post modern look of exposed ductwork and the vertiginous aroma of your dark Zambian beans excites me.

All that’s needed is a neon sign and arrow flashing ‘hostage’ over his head. Aleece is a female FBI agent dealing with male superiors who would like to go back to old J. Edgar’s day and sent the ladies back to the kitchen. When Ian escapes, you just know these two will hook up. And when you read this book you will hope these two hook up again. And again. If ever a first book screams series, this is it. Like a country song that makes the pop charts, this is a thriller that will appeal even to lovers of cozy mysteries. Pick it up today, I give BLOOD DRAMA the full ♥♥♥♥♥

Christopher Meeks is giving away a print (US ONLY) or ebook copy of BLOOD DRAMA. For a chance to win, you must leave a comment (with an email address) below. For more chances to win, click HERE.

6 thoughts on “Review of BLOOD DRAMA by Christopher Meeks (and a giveaway!)”