GIVEAWAY AT BOTTOM OF PAGE

Ian Sansom is the author of the popular Mobile Library Mystery Series. He is also a frequent contributor and critic for The Guardian, The Daily Telegraph, The London Review of Books, and The Spectator. He is a regular broadcaster on BBC Radio 3 and Radio 4.

Catch Up With the Author: 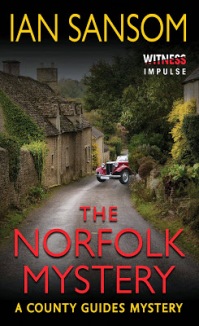 It is 1937, and disillusioned Spanish Civil War veteran Stephen Sefton is broke. So when he sees a mysterious advertisement for a job where “intelligence is essential,” he eagerly applies.

Thus begins Sefton’s association with Professor Swanton Morley, an omnivorous intellect. Morley’s latest project is a history of traditional England, with a guide to every county.

They start in Norfolk, but when the vicar of Blakeney is found hanging from his church’s bell rope, Morley and Sefton find themselves drawn into a rather more fiendish plot. Did the reverend really take his own life, or is there something darker afoot?

A must-read for fans of Sir Arthur Conan Doyle, Agatha Christie, and Charles Todd, this novel includes plenty of murder, mystery, and mayhem to confound.

I’m a big fan of Ian Sansom’s mobile library series set in Northern Ireland so I couldn’t wait to read this new series. Professor Swanton Morley is the author of many, many books on many, many subjects. He is sort of the 1937 equivalent to The Idiot’s Guide To _______ or The Dummies’ Guide To __________. Except for one publishing company putting out all those books by many authors, Professor Swanton Morley is just a one man publishing terror LOL. Stephen Sefton goes to work as his assistant on the new project – a guide for every county in Great Britain, before modern times strips them of all that makes them traditional British counties. What they are about as opposed to a travel guide. Norfolk is the first county and the fact gathering about the county gets a bit sidetracked by solving… a murder? or a suicide?This is not a sit on the edge of your seat mystery but a very pleasant read and a must-read for anyone who is a fan of pre-WWII British mysteries. ♥♥♥♥

I was, in fact, nothing but a cheap murderer.

I was vice triumphant.

Soon after, I was wounded – shot in the thigh. We had been patrolling a no-man’s-land at night, somewhere near Figueras. We were ambushed. There was confusion. Men running blindly among rocks and trees. At the time, the strike of the bullet felt to me as no more than a slight shock, like an insect bite, or an inconvenience. The pain, unspeakable, came later: the feeling of jagged metal inside you. Indescribable. I was taken in a convoy of the wounded to a hospital, no more than a series of huts that had once been a bicycle workshop, requisitioned from the owners, where men lay on makeshift beds, howling and weeping, calling out in a babel of languages, row upon row of black bicycle frames and silver wheels hanging down above us, like dark mechanical angels tormenting our dreams. I was prescribed morphine and became delirious with nightmares and night sweats. Weeks turned into months. Eventually I was transferred to Barcelona, and then by train to France, and so back home to England, beaten, and limping like a wounded animal.

The adventure had lasted little more than a year. It seemed like a lifetime.

Ironically, on returning from Spain, I found myself briefly popular, hailed by friends as a hero, and by idling fellow travellers as their representative on the Spanish Front.

There were grand luncheons, at Gatti’s in the Strand, and speaking engagements in the East End, wild parties at Carlton House Terrace, late night conversations in the back rooms of pubs – a disgusting, feverish gumping from place to place. Unable to comprehend exactly what had happened to me, I spoke to no one of my true experiences: of the vile corruption of the Republicans; the unspeakable coarseness and vulgarity of my fellow volunteers; the thrill of cowardly murder; my privileged glimpse of the future. I spoke instead as others willed me to speak, pretending that the war was a portent and a fulfilment, the opening salvo in some glorious final struggle against the bourgeois. Lonely and confused, attempting to pick up my life again, I ran, briefly, a series of intense love affairs, all of them with unsuitable women, all of them increasingly disagreeable to me. One such relationship was with a married woman, the wife of the headmaster of the Hawthorns, where I had returned to teach. We became deeply involved, and she began to nurture ideas of our fleeing together and starting our lives again. This proposed arrangement I knew to be not merely impossible but preposterous, and I broke off the relationship in the most shaming of fashions – humiliating her and demeaning myself. There was a scandal.

What few valuable personal belongings and furnishings I possessed – my watch, some paintings, books – I sold in order to fund my inevitable insolvency, and to buy drink. A cabin trunk I had inherited from my father, my most treasured possession – beautifully crafted in leather, and lined in watered silk, with locks and hinges of solid brass, my father’s initials emblazoned upon it, and which had accompanied me from school to Cambridge and even on to Spain – I sold, in a drunken stupor, to a man in a pub off the Holloway Road for the princely sum of five shillings.

I had become something utterly unspeakable.

I was not merely an unemployed private school master.

I was a monster of my own making.

I moved into temporary lodgings in Camden Town. My room, a basement below a laundry, was let to me furnished. The furnishings extended only to a bed, a small table and a chair: it felt like a prison cell. Water ran down the walls from the laundry, puddling on the floor and peeling back the worn-out linoleum. Slugs and insects infested the place. At night I tried writing poems again, playing Debussy, and Beethoven’s late quartets and Schubert’s Winterreise – in a wonderful recording by Gerhard Hüsch, which reduced me to tears – again and again and again on my gramophone to drown out the noise of the rats scurrying on the floor above.

I failed to write the poems.

I sold the Debussys, and the Beethovens and Gerhard Hüsch singing Schubert. And then I sold the gramophone.

During my time in Spain a shock of my hair had turned a pure white, giving me the appearance of a badger, or a skunk: with my limp, this marking seemed to make me all the more damaged, like a shattered rock, or a sliver of quartz; the mark of Cain. I had my hair cropped like a convict’s and wore thin wire-rimmed spectacles, living my days as a heroimpostor, and my nights in self-lacerating mournfulness.

Sleep fled from me. I found it impossible to communicate with friends who had not been to Spain, and with those who had I felt unable to broach the truth, fearing that my experiences would not correspond to their own. Milton it was – was it not? – who was of the opinion that after the Restoration the very trees and vegetation had lost heart, as he had, and had begun to grow more tardily. I came to believe, after my return from Spain, that this was indeed the case: my food and drink tasted bitter; the sky was filled with clouds; London itself seemed like a wilderness. Everything seemed thin, dead and grey.

I covered up my anxieties and fears with an exaggerated heartiness, drinking to excess until late at night and early into the morning, when I would seek out the company of women, or take myself to the Turkish Baths near Exmouth Market, where the masseur would pummel and slap me, and I could then plunge into ice-cold waters, attempting to revive myself. A drinking companion who had returned from America provided me with a supply of Seconal, which I took at night in order to help me sleep. I had become increasingly sensitive to and tormented by noise: the clanging and the banging of the city, and the groaning and chattering of people. I could nowhere find peace and quiet. During the day I would walk or cycle far out of London into the country, wishing to escape what I had become. I would picnic on bread and cheese, and lie down to nap in green fields, where memories of Spain would come flooding back to haunt me. I bound my head with my jacket, the sound of insects disturbed me so – like fireworks, or gunfire. I was often dizzy and disoriented: I felt as though I were on board ship, unable to disembark, heading for nowhere. I took aspirin every day, which unsettled my stomach. Some nights I would sleep out under the stars, in the shelter of the hedges, lighting a fire to keep me warm, begging milk from farmers and eating nuts and berries from the hedgerow. The world seemed like nothing more than a vast menacing ocean, or a desert, and I had become a nomad. Sometimes I would not return to my lodgings for days. No one noted my absences.

Near Tunbridge Wells one day, in Kent, I retreated to the safety of a public library to read The Times – something to distract me from my inner thoughts. Which was where I saw the advertisement, among ‘Appointments & Situations Vacant’:

Assistant (Male) to Writer. Interesting work; good salary and expenses; no formal qualifications necessary; applicants must be prepared to travel; intelligence essential. Write, giving full particulars, BOX E1862, The Times, E.C.4. I had, at that moment, exactly two pounds ten shillings to my name – enough for a few weeks’ food and rent, maybe a month, a little more, and then . . .

I believed I had already engineered my own doom. There was no landfall, only endless horizon. I foresaw no future. I applied for the job.

The publisher is giving away 5 ebooks for use in the BlueFire Reader App. To be entered 1) leave a comment below then 2) click HERE. Good luck!

3 thoughts on “Review of The Norfolk Mystery by Ian Sansom (and a giveaway!)”