I am pleased to welcome Rory McCain to the blog today. She is here because Sharon Pape is on tour with Great Escapes Virtual Book Tours to let you know aout her latest book, SKETCHER IN THE RYE. Be sure to enter the contest below.

Hi, I’m Rory McCain from the “Portrait of Crime Mysteries” by Sharon Pape. I want to thank Kate Eileen Shannon for inviting me here to tell you a bit about my ghost partner, federal marshal Zeke Drummond.

Having been dead since the late eighteenth century, Zeke needs a lot of practice learning how to act as if he’s still alive, and  it’s proven to be a tricky proposition. I’m pretty sure we‘ve already traumatized at least a dozen, innocent souls who were just trying to go about their daily lives. You see, Zeke has the ability to appear solid and three dimensional as long as he’s well rested. The problem is that these manifestations require a lot of energy on his part, and he’s been known to run out of steam at the  most inopportune of times. A general loss of cohesion and disappearing body parts are two of the problems we’ve been working on. During our field trips, he also has to be on alert to keep anyone from touching him. The moment mortal flesh intersects with ghostly ether the gig is up. So practice is essential and real world application a must if Zeke wants to continue accompanying me on investigations.

During one distressing practice-session, I was driving and he was riding shotgun when we were cut off, and I had to slam on the brakes. Since he can’t wear a seatbelt, he went flying forward into the dashboard, causing his image to scatter like a dandelion gone to seed. He managed to reconstruct himself quickly, but as luck would have it the guy in the next lane witnessed the whole thing. Thankfully by then we were stopped at a red light. The man’s skin turned a mottled gray and his jaw dropped open so wide I thought it might have come unhinged. I smiled him an apology, but he seemed too dumbstruck to notice. I can only hope that he managed to get home safely.

Another time Zeke and I were in a department store when I caught sight of an old acquaintance by the name of Lois. I thought about making tracks in the opposite direction, but she’d already spotted us. She hurried over, all smiles and curiosity, her eyes clearly homing in on Zeke. For better or worse, he does tend to attract the ladies. Lois and I kissed the air a good six inches from each other’s cheeks. Then it was time to introduce the marshal. We were standing in a narrow aisle of the store without much space between us. If Lois reached out she could easily touch him. What to do? I hoped Zeke had something useful in his bag of tricks, because mine was empty. The situation was becoming more awkward by the nanosecond. Well, I told myself, we’re here to learn how to deal with just this sort of unforeseen problem, aren’t we? “Lois,” I said, trying to sound breezy and natural, “this is my business partner, Zeke Drummond. Zeke, this is Lois. We went to high school together.”

Lois smiled and batted her eyelashes for his benefit. “So nice to meet you, Marshal,” she said, extending her hand to him. My insides were performing a nervous little tap dance that would have done River Dance proud. How was Zeke going to avoid shaking her hand without appearing rude? Really? I asked myself. Being rude was what I was worried about? How about the consequences of Zeke coming out of the ghost closet right in the middle of a busy department store?

He started to reach for her hand. I tried not to gasp out loud. At the last moment, he was ambushed by a coughing spasm. His hand flew up to cover his mouth. Once the cough was under control, he apologized in a believably raspy voice and said he was pleased to meet her too. Lois didn’t seem eager to offer her hand again. Crisis averted. We talked for another minute, at which point I glanced at my watch and claimed to be late for an appointment. I sure wish all of our practice sessions ended that well.

I started writing stories as soon as I learned how to put letters together to form words. From that day forward, writing has been a part of my life whether it was my first attempt at a novel in seventh grade or the little plays I wrote for my friends to perform for neighbors and family. After college, when I was busy teaching French and Spanish to high school students, I was also writing poetry — some of it in French.

After several years, I left teaching to be a full time mom, and when my two children started school, I went back to writing. To my delight I found that the muse was still there, still waiting patiently for me to come around. My first novel, Ghostfire, was published at that time. It went on to be condensed in Redbook magazine (the first paperback original the magazine had ever condensed.) Then came The God Children and The Portal. Redbook also published my first short story, which was subsequently sold to several foreign magazines. With two great kids, a golden retriever and a loving, supportive husband (whom I’d met at the beach when I was fourteen — but that’s a story for another day), I felt like I was exactly where I was meant to be in my life. But fate had another plan for me, and it went by the name of “breast cancer.”

Looking back, I realize how fortunate I was that the cancer was discovered at such an early stage, but at the time it was all very overwhelming. Once I was back on my feet, I wanted to help other women who were newly diagnosed, worried and afraid. I became a Reach to Recovery volunteer for the American Cancer Society and went on to run the program for Nassau and Suffolk Counties on Long Island. A number of years later, with the help of my surgical oncologist and two other volunteers, I started Lean On Me, a nonprofit organization that provides peer support and information to breast cancer patients. When Lean On Me celebrated its tenth anniversary it no longer required as much of my time, and I once again found myself free to pursue my first love — writing. 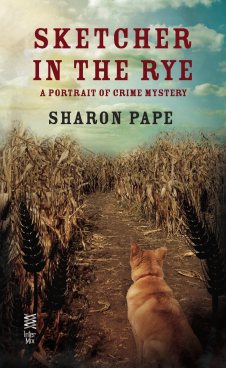 Trouble has sprouted at Harper Farms. Top secret info has been leaked to the competition, and now there’s serious sabotage cropping up. So the farm’s beleaguered owner, Gil Harper, has called on Rory to dig up some dirt. But what Rory discovers raises a new field of questions…

Someone shucked Harper’s accountant and left his body in the farm’s corn maze. While Gil is quick to hire Rory to solve now not one but two crimes, the sketching sleuth isn’t so sure why the farmer wants her to focus her attention on his own family.

Regardless, Rory and Zeke will need to put their hands to the plow and solve this case before someone else is planted six feet under… READ CHAPTER ONE HERE

Really enjoyed the book. I was disappointed to discover it was not a first in a series and I didn’t have time to go back – but I plan to at the first available chance. Good writing, well developed mystery and characters -. Rory, Hobo, Zeke, Eloise – you will want to revisit again and again.  New series and writer to follow. ♥♥♥♥

FOR A CHANCE TO WIN AN EBOOK COPY OF SKETCHER IN THE RYE, LEAVE A COMMENT BELOW. GOOD LUCK!

9 thoughts on “Meet Rory McCain of Sketcher in the Rye by Sharon Pape (and a giveaway!)”