Through this door is a secret place…

The Eighteenth Amendment (Amendment XVIII) of the United States Constitution effectively established the prohibition of alcoholic beverages in the United States by declaring the production, transport and sale of (though not the consumption or private possession of) alcohol illegal. The separate Volstead Act set down methods of enforcing the Eighteenth Amendment, and defined which “intoxicating liquors” were prohibited, and which were excluded from prohibition (e.g., for medical and religious purposes). The Amendment was the first to set a time delay before it would take effect following ratification, and the first to set a time limit for its ratification by the states. Its ratification was certified on January 16, 1919, with the amendment taking effect on January 17, 1920.

The police, courts and prisons were overwhelmed with new cases; organized crime increased in power, and corruption extended among law enforcement officials. The amendment was repealed in 1933 by ratification of the Twenty-first Amendment, the only instance in United States history that a constitutional amendment was repealed.

Article from the Daily News about Danny Walsh

Prohibiton Presciption. This comes from the time in America when Marijuana was legal, and Whiskey was NOT!

If someone told you about a long hidden (since 1933) tunnel, wouldn’t you have to check it out? I most certainly would but I was very surprised to find myself  in the minority.
.
It all started when my husband listed a house. That’s what he does. He sells houses. (Dick “hell of a guy” Thomas – call him if you are buying or selling in RI or MA) Oh, another house listing, ho hum. Rumour is there is a tunnel from the basement to the garage. Suddenly I’m interested.
.
We have a thing about basements and tunnels in my family. (Just read my book if you want to see how I love tunnels.) Now I knew about basements – that’s the place the parents sent us to play when in Rhode Island. But as many of you know, we’ve lived in Ireland, Florida and Rhode Island. Ireland and Florida do not have basements. My son didn’t make it to Rhode Island until he was ten years old. He was amazed at the whole concept of basements. My very first real estate listing in Rhode Island not only had a basement, it had a bomb shelter. My son wanted me to buy it for us. I considered it. I was thinking wine cellar, he was thinking coolest club house ever. The house I ultimately bought had a pretty cool basement with a finished part with a bar and a kitchen – my son’s well equipped clubhouse, a storage room with shelves for canning, a large just plain old cellar part and another room with a strange contraption. So I brought another real estate agent friend over and dragged him to see this strange thing. Big cement block coming up out of the floor with two upright beams and one across… He looks at me and can see the wheels spinning, “Kate, they were Italian, not kinky. It’s a wine press.” Well, the big turn screw thingie was missing, but you see which way my warped mind wanders… So I thought I had the coolest basement going until now.
.
When I inquired why there was a tunnel from the basement to the garage, my husband said the rumour was it belonged to a bootlegger. Rumour? What’s it like? NO ONE HAD EVER CHECKED IT OUT. Seriously???? Seems the house had gone through several changes in ownership and none of the people even knew about it. But the most recent owners got to talking to an elderly resident on the street who told them the house had belonged to a bootlegger and he had put in the tunnel. BUT THEY NEVER WENT LOOKING FOR IT!!! I never cease to be amazed by the lack of intellectual curiosity you find in people. I may have gotten in the occasional jam (having to back down a winding road, barely the width of my car, on the side of a cliff when I wondered where a road went – just for example) but hey, you only live once. I insisted on checking this out. My husband said it’s blocked off but I could see the safe if I wanted. Seems on one side of the basement there was a room (outside the footprint of the house itself) sized safe! I figured I’d go check that out. Of course I always carry a tire iron under my front seat (hey, they come in handy, this is RI) and I figured I would open the tunnel myself. Fortunately, before I had to demonstrate my knack for destruction, one of the many inspectors who came to the house thought like I do. There’s a tunnel back there? You’re kidding. BOOM! Down came the wall. And it was more than a tunnel.
.
Here you see, just your ordinary basement.
.

.
And that is my husband examining the one not ordinary thing. Where you should have just the side wall of the basement is a safe door which leads to a room off the footprint. For those of you not into real estate terms, the footprint is the space a structure takes up on the land. Usually the basement does not take up more space, extend beyond the above ground structure. At least not in houses.
.

.
That is one solid safe door. Must have been quite expensive circa 1920. But right there for all to see and years ago it had been disabled so no one would lock themselves in. So basically it was just another storage area used by tenants through the years since 1933. And then under the cellar stairs, on the other side of the basement, there was a closet. Just your typical making use of some dead space to store shovels and rakes and things like that.
.

.
Now the back wall had been torn out by that one curious inspector before I got there.
.
.
And low and behold, behind what had just looked like a closet wall that was used to hang some tools and such…
.

.
was an alcove and another safe door!
.
This safe door led to a tunnel. To go through this tunnel, you had to stoop over. And from this point on it was pitch black. PITCH. BLACK. Back in the day it did have electricity. There are wires and light fixtures. But this has been closed up since 1933. At some point the electricity in the home was upgraded. Now this means at some point there was an electrician there. He saw the wires going…. where? Wasn’t he curious? Why was this not opened then? Anyway… I wanted to rent some spotlights and a movie camera and film this. My husband had the attitude it was another Geraldo Rivera/Al Capone fiasco so no lights, no movie camera. Of course Geraldo expected to find something. I didn’t. I expected to find a tunnel leading to the garage, nothing more, which is why the safe doors surprised me. But to give credit to my husband, he bought me the wonderful professional camera that allowed me to take these pictures with zero light.
.
So first we had the tunnel
.

.
But it didn’t lead to the garage. It opened into a large room, as big again at least as the original basement! No gold or riches. Bottles and debris. But still. So exciting. You do not expect to find this under a two family house in Providence.
.

.
This was not some dirt tunnel dug by Hogan’s Heroes. They had electricity, as I mentioned, and steel beams holding up the ceiling.
.

.
And what is more, they had this contraption to access the garage. The garage floor is concrete slabs. That move!
. 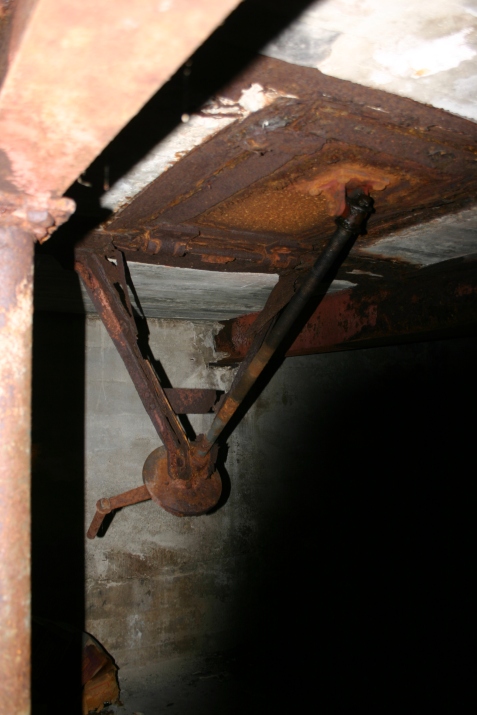 .
Think of what an operation this must have been. The bootlegging operation and the building of this secret place. The place is bone dry. Given the floods we have had in recent years, and all the flooded basements, it really is remarkable. There was one boulder that obviously could not be removed.
.

.
Probably made a comfortable seat.
.
I did get one treasure to take away with me. Right in the middle of all the debris was a fedora. Just sitting there since 1933.
.

.
I’m sorry to say there was no lining or hat-band left. Would have made my search so much easier – back in the day, haberdashers put the owner’s name on the hat-band. I do have the hat however, and a collection of different bottles. The hat and an Indian Hill Bourbon Whiskey bottle are going into a plexiglass display case as a souvenir. Complete with the original dust and dirt.
. 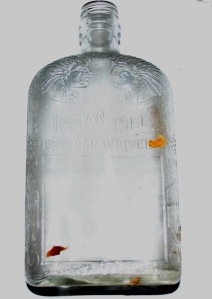 .
There will be more to come. There are more pictures. And I have to go to city hall to research the property title. I have a pretty good idea who was running an operation the size this one was. But when you are running a large criminal operation, you don’t necessarily put your name on the deed and you don’t live there. So it may take some time to look up and interview descendants of the owner of record. But we have already established that I am curious so this is right up my alley. I have already found out a couple of things. For example, during prohibition, when all this illegal dealing was going on, THE CHIEF OF POLICE lived across the street! Well, this is Rhode Island so that isn’t really a surprise. But I was telling this story to my godmother and she started telling me stuff – years after prohibition, when she first came to America from Ireland, she worked as a maid for said chief of police! So we are having a long sit down and I am going to record all her stories – she is a wonderful story teller and she says there are many to tell!
.
So this page will have periodic updates. I’ll post on Facebook any time I have something new. But so many people wanted see more than the picture of the hat I posted, I figured I would put this up for now. Check back.
.