Join me today and tomorrow as we travel down South to Paradise. You will find my review of DANCING BACKWARD IN PARADISE below and tomorrow Vera Jane Cook will be here on the blog for an interview. And do be sure and check out the other stops on her tour.  Just leave a comment for a chance to win an ebook copy. Comment both days for two chances. 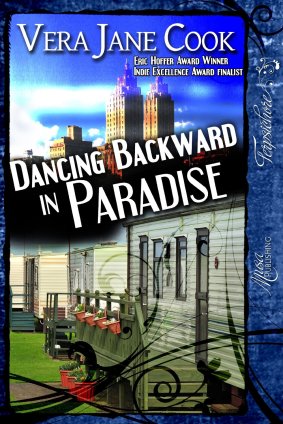 Life for Grace Place is all about sucking on “meat jerkys” and Lenny Bean, her handsome lover. Grace’s mother has loftier plans for her daughter. She insists that Grace save her money and move to New York City so she can find fame and fortune as an actress.

Grace works as a cleaning lady for wealthy Betty Ann Houseman so she can pool her pennies for the trip north. Betty Ann has a passion for men more pronounced than her overbite, and it isn’t long before she’s parting the sheets for Lenny Bean. But just before Grace leaves Hixson for New York City, she uncovers an insidious plot: the Bean family is trying to steal Betty Ann’s estate.

Grace flees to New York, where she faces her darkest hours. In a world of surprises, Grace truly discovers paradise.

I like Southern Literature. Not as a steady diet, but it makes a nice break. I used to live in the South. Things are different. It’s warmer. Things move slower. People talk slower. You can develop a complacency. But there is a dark side. It’s not all Tara and Mint Juleps. Paradise is a trailer park and even the rich widow of the story is pretty trashy. This is a coming of age novel. Grace Henrietta Place grows up in a trailer park. Sexually abused, starting with her grandfather. Raised on beans and grits and tales of New York City by her faded beauty, alcoholic mother, Madeline. Madeline imposes her dreams on Grace and Grace feels she must comply. You will follow Grace Place from the trailer park, Paradise, in the Chatanooga suburb of Hixson, all the way to New York City and back as she comes of age in the turbulent sixties. And you will see her grow and rise above what many wouldn’t have. Wait for a nice, hot, sunny day. Find a shade tree, bring some sweet tea, get comfortable and start DANCING BACKWARD IN PARADISE. ♥♥♥♥ 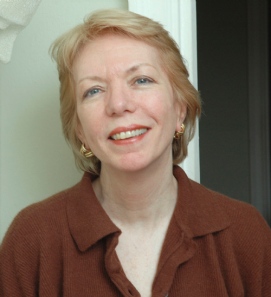 Vera Jane Cook, writer of Award Winning Women’s Fiction, is the author of Dancing Backward in Paradise, The Story of Sassy Sweetwater, Where the Wildflowers Grow and Lies a River Deep. In the paranormal genre, Vera Jane is the author of Annabel Horton, Lost Witch of Salem.

Jane, as she is known to family and friends, was born in New York City and grew up amid the eccentricity of her southern and glamorous mother on the Upper West and Upper East Side of Manhattan. An only child, Jane turned to reading novels at an early age and was deeply influenced by an eclectic group of authors. Some of her favorite authors today are Nelson DeMille, Wally Lamb, Anne Rice, Sue Monk Kidd, Anita Shreve, Jodi Picoult, Alice Walker and Anne Rivers Siddons. Her favorite novels are too long to list but include The Story of Edgar Sawtelle, Cheri and The Last of Cheri, The Picture of Dorian Grey, A Thousand Splendid Suns, The Kite Runner, Dogs of Babel, The Bluest Eye, The Color Purple, Body Surfing, Lolita, The Brothers Karamazov, She’s Come Undone, Tale of Two Cities, etc., etc., etc.,

Jane worked in the professional theatre for over a decade, falling further in love with the plays of Tennessee Williams, Eugene O’Neil, Lillian Hellmann, and Sam Shepherd. She has appeared in television, regional theatre, film and off Broadway. Some of her credits have included both classic and original plays at Playwrights Horizons, WPA Theatre, Kennedy Center, Theatre for The New City, Bucks County Playhouse and many others.

After ten years in the theatre, Jane developed a passion for art history, film theory and philosophy. To nurture her many interests, she enrolled at Hunter College through the CUNY BA/BS program from the City University of New York.

A bizarre mid-life crisis forced Jane into corporate life at the age of forty-five. She worked as an education territory manager for The New York Times and presented many workshops on using the newspaper in education as a tool for teaching English as a Second Language. She has worked as a Project Manager for the Education department of the New York Daily News, as well as an Education Specialist for Oxford University Press (ESL division) and as an Education Consultant for Scholastic. Jane is presently an account manager at Triumph Learning in Manhattan and Westchester.

Jane has completed ten novels. Her next novel, Marybeth, Hollister and Jane, will be published by Musa in 2013. Dancing Backward In Paradise won an Eric Hoffer Award for publishing excellence and an Indie Excellence Award for notable new fiction, 2007. The Story of Sassy Sweetwater and Dancing Backward in Paradise received 5 Star ForeWord Clarion Reviews and The Story of Sassy Sweetwater has been named a finalist for the ForeWord Book of the Year Awards. Jane has published in ESL Magazine, Christopher Street Magazine and has written several newsletters and online blogs. Jane has also written early childhood curriculum. Her published curriculum has been for Weekly Reader and McGraw Hill.

The author is married and lives on the Upper West side of Manhattan with her spouse, her Basenji/Chihuahua mix, Roxie, her chihuahua puppy, Peanut, and her two pussy cats, Sassy and Sweetie Pie. Added to the mix is Carly, an adopted five year old chocolate brown Dachshund.