John Gaspard was here a year ago (be sure and read the interview) for his first book, THE AMBITIOUS CARD, so I am thrilled to let you know his second book, THE BULLET CATCH, is out today.

In real life, John’s not a magician, but he has directed six low-budget features that cost very little and made even less – that’s no small trick. He’s also written multiple books on the subject of low-budget filmmaking. Ironically, they’ve made more than the films.

John lives in Minnesota and shares his home with his lovely wife, several dogs, a few cats and a handful of pet allergies. 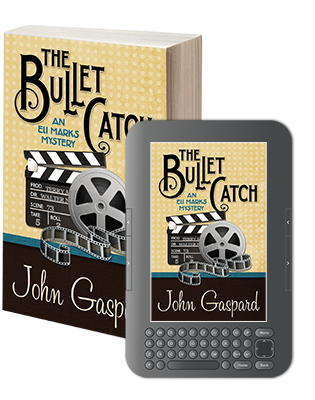 Newly-single magician Eli Marks reluctantly attends his high school reunion against his better judgment, only to become entangled in two deadly encounters with his former classmates. The first is the fatal mugging of an old crush’s husband, followed by the suspicious deaths of the victim’s business associates.

At the same time, Eli also comes to the aid of a classmate-turned-movie-star who fears that attempting The Bullet Catch in an upcoming movie may be his last performance. As the bodies begin to pile up, Eli comes to the realization that juggling these murderous situations — while saving his own neck — may be the greatest trick he’s ever performed.

I loved the first book, THE AMBITIOUS CARD (which happen to be on sale for 99¢ right now! be sure and grab it to start you off), and this second book did not disappoint. I love mysteries that teach me something new and as I know nothing about magic tricks, these books are a delight. This book opens with first time therapy patient Eli at a session. He’s having “uncontrolled panic, an intense physical reaction, suicidal ideation, and a sense he is losing control and might harm himself if he can’t get away from a high location”. After hearing about recent events, book one in other words, the therapist decides he needs therapy two or three times a week, LOL. Of course, Eli has more important matters to take care of. Someone is trying to kill his friend, actor Jake North, either because he is making a movie about magician Terry Alexander who died trying to perform the magic trick known as The Bullet Catch, or because Jake used to be “The Cloaked Conjurer”, exposing how magic tricks are done. Jake is sure he will die in the last scene so Eli is along to see that he doesn’t. A book you will want to read and a series you will follow, this one is ♥♥♥♥♥

And for those of you who are curious, here is a magician doing the bullet catch. A female, mind you.

One thought on “Release Day Spotlight: THE BULLET CATCH by John Gaspard”