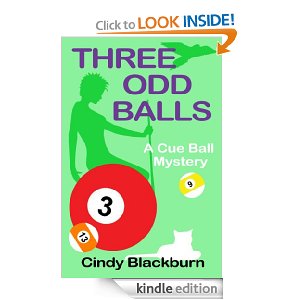 Don’t be picking up THREE ODD BALLS, by Cindy Blackburn, of an evening unless you are prepared to read until the wee hours. Because you won’t be able to put it down. And don’t pick it up unless you are in a mood to laugh. A lot. This series started good but each book has gotten better. In book two, Jessie made quite a lot of money going undercover as a pool hustler so she decided to use it to take boyfriend Wilson to Hawaii. And it was also to do some research to set her next romance novel in the South Pacific. One thing leads to another and the romantic getaway gets a bit crowded when Jessie’s mother and agent and Wilson’s surfer son all tag along. The bartender in their hotel is murdered and it is set up to look like Wilson’s son Chris did it. There are some side splitting scenes in this book, many due to the fact pool shark Jessie is not a great outdoors kind of girl. Get all three books in the series, DOUBLE SHOT, PLAYING WITH POISON and THREE ODD BALLS, you won’t regret it. ♥♥♥♥♥ + + + http://www.amazon.com/Three-Odd-Balls-ebook/dp/B00AD9JEAU/ref=pd_sim_kstore_1