I have read all of Gemma Halliday’s High Heel series and enjoyed them. I am not familiar with her new writing partner Jennifer Fischetto, but I don’t notice a change in the Bond series as far as writing style. When you pick up Gemma’s books you know you will get a good mystery that will not disappoint and a touch of romance as well.  They make a perfect  read when you’re at the beach or taking a flight. Jamie and 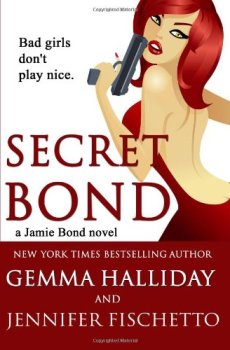 Danny or Jamie and Aiden do not appeal to me like Maddie and Ramirez did. Actually all the characters are fine, I just miss the old ones I suppose. Especially Mrs. Rosenblatt. Although Maya’s (Jamie’s receptionist) mother shows promise along with her friend Ruth of becoming suitable replacements for Maddie’s mother and Mrs. Rosenblatt. And a writer can grow tired of the same characters all the time – even if the readers don’t. But you have a good mystery here with Jamie investigating the shooting of her father Derek, three years earlier, when new evidence comes out at a trial of a dirty cop. And there is a fun secondary storyline where Jamie and her investigators go undercover at a nudist colony. Perhaps undercover is the wrong word 😉 . Pick it up today, it is definitely worth the read. ♥♥♥½

Her name is Bond. Jamie Bond. And she is licensed to kill any pre-nup you can throw at her. Catching cheating husbands became Jamie Bond’s life when her father was shot and wounded on the job, forcing Jamie to take over the family business: The Bond Agency. But three years later, the PI is shocked when the gun that wounded her father surfaces during a high-profile murder trial. Is this the connection Jamie’s been waiting for to finally nail her father’s shooter? But, oddly enough, Derek Bond doesn’t seem interested. In fact, if Jamie didn’t know better she’d say he’s even trying to stop her from looking into it. Along with her team of bombshell investigators, Jamie suddenly finds herself in the middle of a cold case that’s heating up the media, dodging old grudges and new enemies, while questioning the motives of those closest to her. If she can live with the truth, the secrets Jamie uncovers may bring down more than a marriage this time.

GEMMA HALLIDAY In her previous life, Gemma worked in such diverse jobs as a film and television actress, a teddy bear importer, a department store administrator, a preschool teacher, a temporary tattoo artist, and a 900 number psychic. Luckily, she sold her first book, Spying in High Heels, in 2005, ending her string of eclectic employment.

Since then, Gemma has been the recipient of numerous awards, including a National Reader’s Choice award and three RITA nominations. She now makes her home in the San Francisco Bay area, where she is hard at work on her next book.

JENNIFER FISCHETTO When not investigating suspects, burying evidence in her yard, cooking another batch of poisonous brownies, or dealing with ghosts and other supernatural baddies, she sits in the corner of her creaky, damp basement, writing contemporary stories of mystery and suspense for young adults and adults. With the occasional fun, humorous tale to cover her tracks, so no one notifies the FBI or calls for a straitjacket.