Rita Strombeck has a Ph.D. in Scandinavian Studies and M.A. in French from the University of Chicago.   Like her heroine, Eve Iverson, she taught languages for several years and enjoys painting. In 1982, she started her own business.  Over the years, she has developed more than 50  education books and programs for health care professionals and the general public.  Rita also received 12 grants from the National Institutes of Health (NIH) and has written successful grant proposals for various nonprofit organizations.   She currently lives in Palm Springs and recently wrote an article for Palm Springs Life magazine on the city’s early women entrepreneurs  – “Women With Vision.”

Ever since discovering Nancy Drew in 5th grade, Rita has been a fan of mysteries and now has decided to focus on this first love.  She has written a children’s book  based on Sherlock Holmes. HOT TUB OF DEATH is her first cozy mystery. 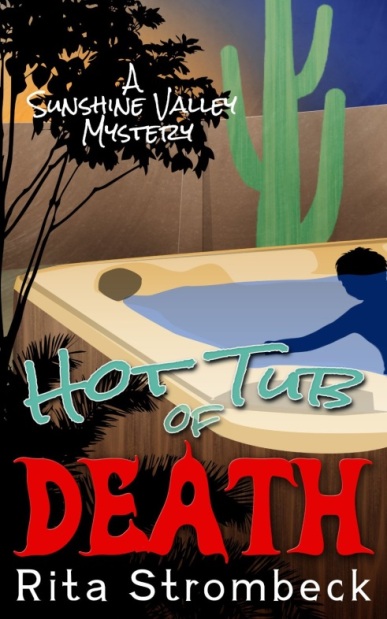 On the surface, Sunshine Valley appears to be an idyllic small town in Arizona’s picturesque Sonoran desert. When Adam and Eve Iverson, a retired married couple, move to this seemingly peaceful community, they have every intention of pursuing their individual passions. Then, one day, their plans are disrupted when they discover the body of Olive Howell, the most disliked and feared woman in the valley, floating in the community hot tub. In the days that follow, the main topic of conversation in Sunshine Valley revolves around the death of Olive Howell. At first, her death is ruled accidental, but this pronouncement doesn’t sit well with the Iversons. Driven by her intuition and keen perceptiveness, Eve begins to sort through a series of clues that indicate murder, and soon discovers that several people had strong motives and opportunities to kill Olive. Based on his own reasoning, Adam begins a separate investigation. Following their individual instincts and hunches, and by cleverly sorting through all the facts, Adam and Eve work together to ferret out who among the seemingly harmless residents of Sunshine Valley could have created the HOT TUB OF DEATH.

The story started slow… no, I quickly realized, that was just the pace the author wanted us to feel. No cell phones, no computers, no Jimmy Choos or Manolo Blahnik high heels. Were it not for the fact that in the 1940s hot tubs began to appear in the USA so we know the story happens since then, the story could have taken place at any time. I thought naming the protagonist Eve and her husband Adam was just that little bit too twee but I came to like it – it is cute and they are cute. Eve decides an accidental death is murder and rather than warn her off investigating, like most cozy husbands, Adam also investigates. Not really with Eve, more like it is a competition which one of them will solve the mystery first. And that was really kind of amusing. Despite feeling it was slow at first, I really enjoyed this one. The style is not unlike the traditional British cozies set in a small village that we saw so many of a few years back – timeless. ♥♥♥♥